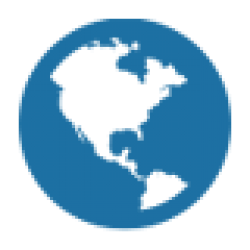 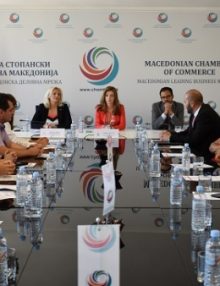 The Macedonian – Swiss Business Club was officially established with the support of the Swiss Embassy and the Macedonian Chambers of Commerce. Addressing the present companies, founding members of the business club, the President of the Association, Danela Arsovska and the Deputy Ambassador of Switzerland, Stefan Tomajan, marked the beginning of the work of the Macedonian-Swiss Business Club and gave special emphasis to the commitments made, at the club. The president of the business club was Jasminka Taleska, director of the Swiss company Novartis. Arsovska noted that the business club was formed as a result of the detected need and potential for increasing business cooperation and the number of Swiss companies operating in our country.“There is great potential for further enhancing the opportunities for cooperation between companies from both countries. The purpose of the establishment is first and foremost to increase cooperation. By uniting Swiss equity companies and companies in the Union that have an interest in cooperation, we believe we will increase trade by € 105 million last year, with exports of € 40 million and imports of € 65 million. euro, ”Arsovska said. Switzerland’s Deputy Ambassador Tomajan stressed that the Embassy will strive to strengthen cooperation between the […] 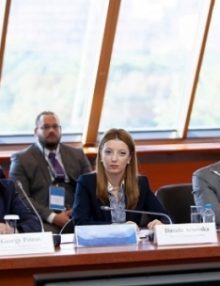 Arsovska: Trade agendas should be resolved through negotiations rather than blockades

Moscow, Russia – The World Chambers Federation (WCF), the only Chamber of Commerce where 20 representatives globally run over 12,000 chambers of commerce worldwide, is meeting this year in Moscow, Russia. Our first position in the leadership of the World Chambers Federation WCF, among the 20 elite chambers of the strongest economies in the United States, China, Great Britain, Russia, Turkey, India, Iran, Israel, Italy, Germany, France, Canada, Brazil, Germany, Austria provides the opportunity for direct participation in world economic developments, positioning our country as the center of the region for new investments, as well as opportunities for reliable partnerships for domestic businessmen to increase exports. President of the Macedonian Chambers of Commerce Danela Arsovska, last year appointed Macedonia’s first representative in the leadership of the World Chambers Federation (WCF), stressed that the main focus of the annual meeting is trade barriers that are causing not only regional but global decline the economic results, the reduction of trade and the displacement of markets, effects that not every economy can sustain without long-term consequences. In this regard, the realization of trade agendas based on economic diplomacy plays a key role, which in the modern world is a way of communication to […] 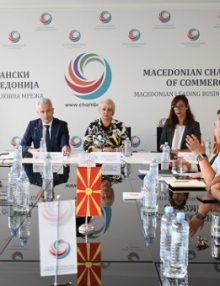 The importance of digitalization, in the focus of the meeting with the Customs Administration

The Vice President of Macedonian Chambers of Commerce, Gabriela Kulebanova and the Director of the Customs Administration, Gjoko Tanasoski, discussed the importance of digitization and modernization of the Customs operations with companies members of the Chamber. Constructive and sustainable two-way communication and integration between customs and the business community is needed to ensure the success of reform programs. 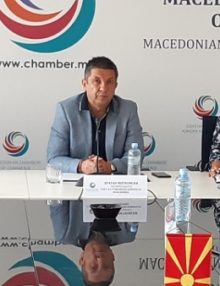 Three priorities for protection the accounting

The importance of financial statements, annual accounts and other financial information is of great importance to both accounting service users and other entities in the community, the state, banks and investors. In this regard, the Chamber of Accountants believes that it is necessary to raise the quality of their preparation, to further reduce unfair competition and the gray economy in the sector, as well as to strengthen the interest of young people to study the accounting profession, was emphasized at today’s press conference. Macedonian Chambers of Commerce. The President of the Chamber of Accountants, Dragan Mitkovski, said that it is necessary to provide exclusively the right of signature only to a person registered as an authorized accountant, which in addition to the accountants will have appropriate rights deriving from their qualifications.“Accounting should be raised to a much higher level and the work of accountants who, with proper legal implementation, responds to the needs and requirements of their clients, and on the other hand, responds to the needs of institutions, more precisely to society as a whole. . In this regard, all Laws should be adopted after prior consultation and in cooperation with relevant stakeholders in the field and jointly act […] 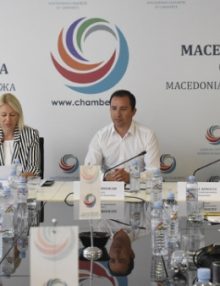 Continuation of the project “Buy a house buy an apartment”

Construction chamber of commerce has been supporting the “Buy a House Buy an Apartment” project from the very beginning of its promotion and believes that the new conditions will additionally influence the stimulation of the sale of new apartments for young people. In addition, the growth of the construction sector in the construction sector is further supported by building new housing units, retaining existing ones and generating new jobs, all of which will affect the growth of the overall economy, it was stated at today’s press conference at the Macedonian Chambers of Commerce. . The President of the Construction Chamber of Macedonia, Mr. Ivica Jakimovski noted that this project benefits companies through increased sales of high quality and energy efficient housing, young people who with very favorable conditions will be able to get a new apartment, local government and central government. “The Macedonian Chamber of Commerce, which is the only chamber that unites the construction sector, supports the project Buy a House Buy an Apartment because it is in the common interest of all, and above all, the citizens who will find it easier to invest in their future and stay live and work in Macedonia. In addition, this project […] 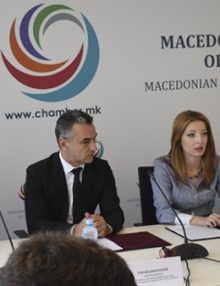 The Chamber of sole proprietors-authorized surveyors and trade companies for geodetic works (Chamber) joined the Macedonian Chambers of Commerce (MCC), making it officially the 35th Chamber in the Union. The Chamber works to represent the interests of the authorized surveyors and surveying companies, protect the public interest and strengthen and develop the geodetic works as a professional professional field. The President of the Union, Danela Arsovska and the President of the Geodetic Chamber, Goran Jovanoski officially signed an Agreement for accession to the Macedonian Chambers of Commerce. Arsovska noted that with the accession of another Chamber to the MCC for a period of one month, the Union shows that it is a serious partner of the business community and a strong advocate of the interests of the professional sphere, within a comprehensive structured chamber of business system in which the private sector needs sector are a priority. “The accession of the Chamber of Sole Proprietors and Surveyors for Geodetic Works represents the introduction of yet another professional sectoral segment of the Union’s business operations and an indicator of the relevant representativeness of the private sector. Authorized surveyors and surveying companies are an important part of the process of resolving property […]

News
<
>
Navigation
<
>
Partners  |  Info: There are no items created, add some please.